In the early 19th century, when it was the policy of many of the poorhouses and workhouses to deter paupers from applying by making the conditions inside harsh and unpleasant, two boys set out on a journey to Hackney Workhouse in London. Their starting point was in the pleasant Cheshire countryside, where they were apprenticed to the cotton mill built by Samuel Greg in 1784. Children as young as 9 would be employed there, as scavengers, piecers, mule doffers or can tenters. These jobs could be just as unpleasant and difficult for a poor child as those we may have heard of, such as chimney sweeps and match girls.
Quarry Bank Mill was some 200 miles north of London and the boys had to sneak out unnoticed and then attempt to walk all the way. It was likely that these enterprising travellers took advantage of the drovers’ roads and the newly developed “motorways” of the times – the canals. Perhaps they were lucky enough some days to hitch a lift; their general direction of travel taking them to Beartown, the Potteries, Dunstable Downs and eventually to London. Whatever challenges they encountered along the way archive evidence shows that they made it.
Runaway apprentices had become a problem for society during the years of the Industrial Revolution – so what had prompted Thomas and Joseph to do such a hazardous thing? What happened to them on their long journey? Did they receive any help? Or were they chased relentlessly wherever they ran, since what they were doing was illegal in the eyes of the authorities?
This is the story of their adventure and it concludes with the events in the Middlesex courthouse, known then as the Old Session


TOP 5 STAR AMAZON REVIEWS OF THE QUARRY BANK RUNAWAYS
5.0 out of 5 stars Dickens-esque
By Brian Michaud on 24 May 2017
Format: Paperback
I took a break from reading David Copperfield to delve into The Quarry Bank Runaways. What I discovered was an author with a flair to not only write a historical fiction but also to write historically. Some authors write historical fiction by basically writing a modern novel with a historical background (like a cheaply painted backdrop at a play), but The Quarry Bank Runaways reads like a book from the 1800s. The writing style, descriptions of events, and use of language put the reader firmly in the time period.

I loved the various accents that the characters had as Joseph and Thomas traveled from the north of England (near Manchester) to London. The descriptions of people and places were not overly wordy, yet I was able to picture myself right there alongside the boys as they met both friendly and hostile people and environments along the way. Griffiths uses some of the same devices as Dickens in weaving his tale, such as delving into the backgrounds of minor characters, but Griffiths delivers them in such a way as to instantly give the reader a feel for the characters. What I liked about this was that Joseph and Thomas didn’t just meet a bunch of cardboard characters along the road; you instantly feared, despised, or empathized with them.

This book was not only entertaining but also an education. I was acquainted with the conditions of the workhouses of 19th century England; however, I was not aware of the situations in which children could be sent away and indentured to a mill owner against their or their parents will. My heart went out to the Joseph and Thomas as they walked almost 200 miles just to see their mothers.

I highly recommend this book to those who love historical fiction, fans of 19th century literature, and history buffs of all kinds.


5.0 out of 5 stars An insightful read
By Mrs Bernadette Reid on 18 August 2017
Format: Kindle Edition Verified Purchase
The Quarry Bank Runaways; The journey to London of Thomas Priestly and Joseph Sefton in 1806.
GJ.Griffiths
Publisher GJG (April 2017)
This is my first Saturday off since March and I ‘m spending part of it reviewing a book I have just read on my kindle. That’s how much I enjoyed the book I ve just finished. It’s a short read. It took me 3 hours and I read most of it yesterday in the inspirational setting of the top garden at Quarry Bank Mill. I want to recommend this to you all. It’s a work of historical fiction but well supported by the known facts provided by the boys themselves before the Middlesex assizes. It tells an imagined journey they led from Cheshire to London and the characters they meet along the way. It suggests how they supported themselves, where they may have slept and how they travelled. One of the most charming elements of the book is the dialect that the author has used at great lengths to explain the story. In the reviews I read on Amazon the readers criticised the use of dialect but for me it was essential in emphasising the terms and what they meant. I had no difficulty recognising some of the terms from my own community and that of my parents and grandparents. In both northern and southern twang author cleverly draws out the plot. It gives insight into the historical times they led and creates background relating to the fear of the French invasion, the war with France and its consequences. It touches on the precursors to Luddites, social reform and the establishment of the factory acts. (It was a bit of a stretch to imagine the boys actually met Robert Peel though.) It contrasts the economic gap between rich and poor. Religious persecution is explained and it is faithful to what we know about the Greg family and life as we understand it at Quarry Bank Mill during the early part of the 19th Century.
I did find the boy’s plight amusing in part (though I’m sure this wasn’t the intention of the author) and identified with the lads drawing parallels with my own youth growing up in a mill town as I did. One thing that strikes me is the kindness shown to them by strangers and the author contrasts this with the officiousness of those in the employ of the Greg’s and the ruling class. The thread running through this book is the indomitability of the human spirit where family love is concerned and the book is touching and heart rending especially since you know it’s based on a true story.
I don t like to write a review without making at least one criticism and I thought I had found a term which was anachronistic. I thought the use of constable would be related to the establishment of the first police force but when I looked it up the people of the internet informed me the term has been in use since the 13th Century. You do have to keep reminding yourself this is a work of fiction but it is very believable and created a new empathy for the runaways and a better understanding of the issues.
If you download this book for the kindle it is only 99p a saving of £7.00 and it’s the best 0.99p I ve spent in ages. With acknowledgements to our own archive team. If you ve got a few spare hours read it, and you could do worse than do so with a latte, over-looking the magnificent Quarry Bank Mill in one direction and the Apprentice house in the other as seen from the top garden.
To quote Hilary Mantel. “Life is a live show. You can’t relive it except through art.” GJ.Griffiths has brought this story back to life through word play.

Mules; Masters & Mud is the sequel to The Quarry Bank Runaways and continues the story of Thomas Priestley and Joseph Sefton through the succeeding three decades after their flight from Styal to London. As young adults and then as they continue to mature through various events we discover how life treats them and their families. Their hopes and ambitions meet some of the trials and tribulations of the 19th century.

In other words speech in what some have called "Olde English Vernacular". It is spoken by characters in the book from the North, the Midlands and the South of England. There is a glossary at the end of the book to help if you can rise to the challenge. It adds shades of colour to this 19th century story that you may not be expecting.

Manchester Central Library 2019 when G J Griffiths read the chapter shown here. He shared the stage with Trebuchet a local folk group who sang ballads of the time of the Peterloo Massacre 1819.
peterloo1819.co.uk/event/peterloo-to-read-to-hear-to-feel/A Chapter from Mules; Masters & Mud as a "taster"

An extract from Mules; Masters & Mud - the sequel to The Quarry Bank Runaways. 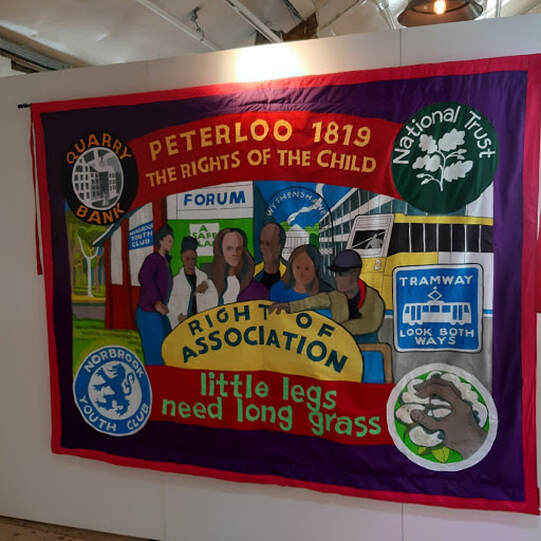 A Poster from Quarry Bank Mill illustrating some of the works shown in the exhibition in 2019
REVIEW QUOTE: "I read this book as a sequel to the Quarry Bank runaways. Many speculate on the answer to the question” what happened to the boys?” G J Griffiths offers some answers In a fictional sense. No less credible this historical fictional book relys on the authors encyclopaedic knowledge of Quarry Bank Mill and blends in a good understanding of the conventions of the times. His graphic description of the Peterloo Massacre is well researched and timely, given the bi centenary commemoration in 2019, and redolent of the spirit of the times. He also explores various occupations of the folk of the early 19th century and his portrayal of life in service is incisive and perfectly captures the stratified tiers of society at the times. Much has been said about the use of dialect in the book. I had no need of the glossary helpfully provided at the end of the book and applaud the author in writing in his singular fashion in a way that reflects the speech of these ancient people of which a modern version is still spoken today . Without giving away the ending I ll just say that the author concludes with a heart rending description of family life in a semi rural community and leave the reader feeling suitably rewarded for reading it. If you want to understand why Peterloo took place read this book."